Just a little note to let you know that the vinyl reissue of Hell Is Eux Autres is officially out today! This means that not only is the record available at fine record shops everywhere, but it is also back on all of your favorite digital services, like Apple Music, Spotify, Amazon, et al.

If you are looking to pick up a physical copy without leaving the comfort of your home, you can do so right here.

We have news! 12 years ago, we released our first record, Hell is Eux Autres. We feel like not enough people celebrate 12 year anniversaries, and Google tells us 12 is the “pearl” anniversary. Which is exactly why we thought it was a great idea to release our first record on clear vinyl right now.

You might be thinking, “This album blew my mind, but why would I want to buy it again?” Well, Hell Is has never been pressed on vinyl before, let alone clear vinyl. Clear means you can actually see through it, thanks to nanotechnology and GMOs. And if you buy it during this pre-sale, you’ll get a digital download of the album that includes early demos and live versions of some of the songs. You’ll also gain access to an exclusive feed where we’ll post other detritus we found while digging through the archives–photos, notes, drawings, and ever more demos and live recordings. And keeping with tradition, early buyers get a free lapel pin with their order!

We are running the pre-sale over at PledgeMusic, which lets nice people like you order the record early, get it before its official release, and get exclusive bonus items, too. We’ve got a bunch of other things for sale as well.

What other things, you ask? Go to PledgeMusic to find out.

Still not sure? Lord, you’re silly! But for skeptics like you, we made a video that explains the whole thing, and some weird stuff about Heather, too.

Sun Is Sunk EP out today!

We are very excited to announce that our new EP, Sun Is Sunk, is out today! CDs and 12″ vinyl are available in the shop. Digital copies can be found there as well, or any of your favorite online retailers. If you’re in the UK or Europe, you can pick up a copy through wiawya.com.

February 28, 2012 we will release our new EP, Sun is Sunk. It’s a compact set of garage pop that we hope you’ll love. We’re super excited about this group of songs. Maybe you’ve heard the first single, “Right Again” circulating on the worldwide web. If not, give it a listen over on the right side of the page.

Sun Is Sunk will be available on 12″ vinyl (with downloads of course), CD, and digital.

And we’ve created a pre-order prize to accompany the first physical pre-orders: an incredibly stylish limited edition enamel lapel pin featuring our new buffalo mascot. All orders through February 28 will also receive an extra digi-EP of a live, acoustic radio set we played in Munich.

Place an order, or give a listen here.

February can be awfully dark. We hope Sun Is Sunk will keep you nice and warm and get you revved up for spring.

Here are some photos of the packaging. Pics of the pins will go up as soon as we have them back from the manufacturer. 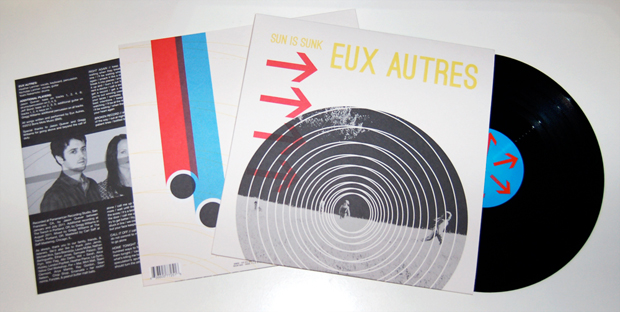 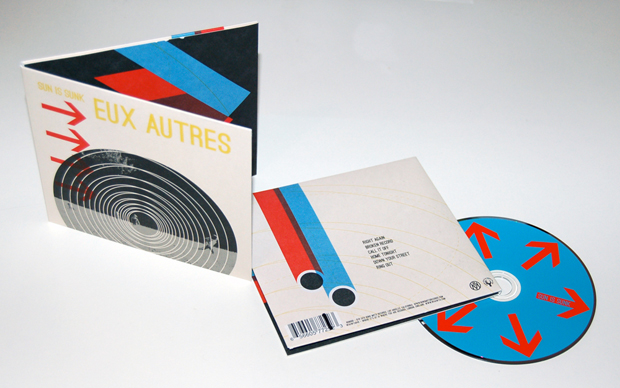 New CDs, fresh from the manufacturer! 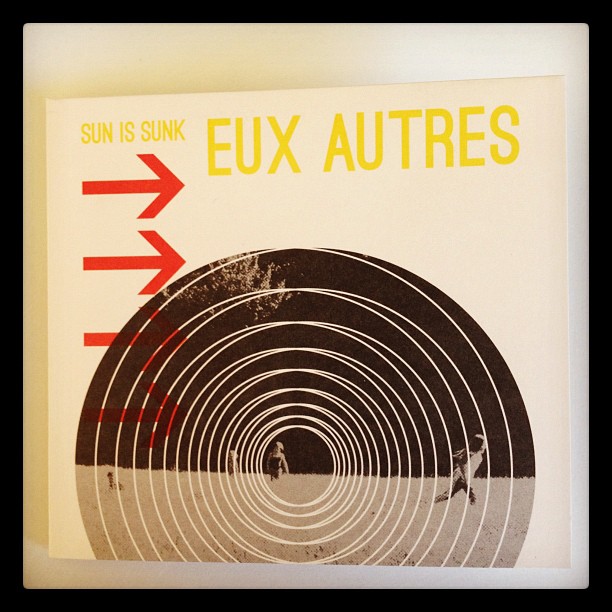 Eux Autres – “Under Rays” from Nicholas Larimer on Vimeo.