We sleep like the dead, having stayed awake for 40+ hours. But we wake up much later than we hoped, and it’s stress from the get-go. I have to figure out how we’re going to get to our next show, I have no idea when the trains or buses leave, and I realize that it’s possible we have made a serious error by not taking care of this sooner. We also are supposed to get to the club by 11AM, which is when we’re meeting everyone to liberate the equipment that we left there overnight. Leaving stuff at clubs makes me nervous. There’s the obvious question of theft, but I find that “club time” is extremely nebulous time. 11 AM could mean 2 PM, which would make us miss sound check for tonight’s show.

We get lucky and everyone’s there. We load up, schlep all of our shit to the train station, find a train, and depart for the fair city of Malmo.

We somehow also don’t know where we’re staying in Malmo, but Love is All has told us that when ever they play the Debaser club, they stay at the same hotel. We’re going to just show up at this hotel and hope that we have reservations there. Otherwise, we’ll have to go to the club, find someone who knows what’s going on, blah blah. I just want a shower. 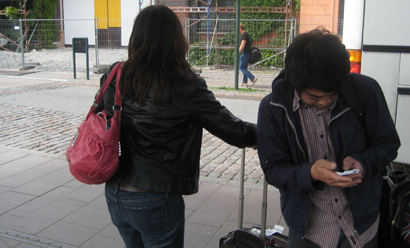 Miraculously, the beautiful woman at the front desk has a reservation for 2 rooms in Yoshi’s name. We haven’t slept more than a foot away from each other for a week. Now, Yoshi gets his own room. We’re high rollers here in Malmo!

Nick and I go to our room and watch a terrifying movie called Quarantine while we wait for sound check.

At the club we meet friends that we hung out with last night in G-burg–Ake and Marcus, who is one of those people whose every facial expression throws me into fits of laughter. Like many great characters, Marcus has a catchphrase: “Dude, come ON!” This isn’t some affected bit of personal branding but rather a spontaneous expression of his joie de vivre, an interjection affirming that, indeed, the world is fucking awesome. Yoshi’s bandmate Jamie has also come to the show from Copenhagen, where he’s decompressing from what sounded like a very crazy Still Flyin tour (are there any other kinds of Still Flyin tours?). The presence of these people is a perfect testament to the incredible small-worldness that accompanies band-dom. I’ve never been to Malmo, Sweden, yet we have a little gang of friends to hang out with backstage. Who’d have thought?

Tonight is a club night, meaning we’re the only band. This may mean that a good chunk of the crowd is just waiting for us to finish so that they get on with dancing to the DJ. However, once we start playing, it’s clear that the crowd is in the mood to dance to us as well. They’re actually going a bit apeshit, screaming and jumping around. Nick and I can’t stop laughing. Hey, come to think of it, Nick seems kind of drunk. Plus Yoshi’s kick drum pedal broke 20 seconds into the first song and he keeps stopping the set to duct tape it, forcing Nick to tell jokes. And then there’s the smoke machine at the rear of the stage–it’s relentlessly pumping out humungous clouds that envelop us; it’s like being stuck in a Cheech and Chong movie. After our last song, the crowd chants, “Ex ah-TRAYS! Ex ah-TRAYS!” The whole thing is a glorious mess. So fucking fun.

We dance and drink and laugh, and soak up the Swedish lust for life. Finally, we retire to our Palace of Separate Rooms. About an hour later, I’m awakened by a gang of gleefully-singing drunks on the street. I can hear Nick laughing on the other side of the room. “They know how to have fun here,” I say. “Yep,” Nick says, and we fall back asleep.