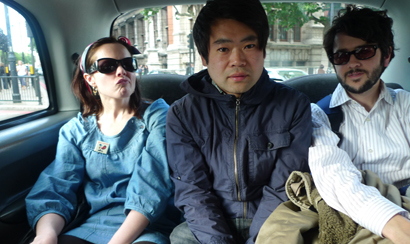 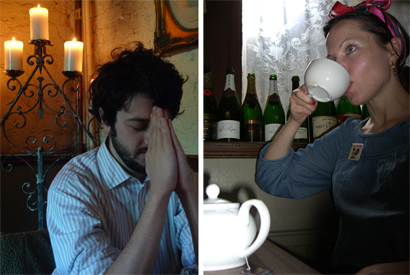 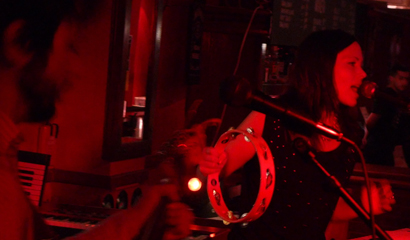 Today, Nick’s birthday, no one gets up until 5 PM. Nick informs me that we’re now officially on Motley Crue time.

I keep getting phone calls, giving me fever dreams about being a loser who stays in bed all day. Finally, feeling like a degenerate, I hit redial for the last number, which is local. The person who picks up identifies himself as Michael. We talk for fifteen minutes and then I ask if he’s bringing his wife to our show. “Who?” he says. “I don’t have a wife.” At that moment I realize I am talking to another Michael, one I haven’t spoken to in about seven years. I’m on a roll.

Our show is sloppy. Sloppy, but really fun. The audience is raucous, bordering on harassing. We love it.

Still Flyin is truly incredible. The idea—a fifteen person, indie rock reggae band–sounds intriguing, and comes off brilliantly, mostly due to the fact that they are complete party animals. On stage, some of them can barely stand up, yet the music sounds terrific. The entire audience is smiling and dancing. After the show, we see a girl from the band puking in the alley. Yoshi seems unfazed and tells me blandly that at least one person pukes at every show.

This is the most fun I’ve had in ages. I am obsessed with Tim Hortons, so I force us to walk around looking for one. We fail, and finally settle on Starbucks. Mike spills his coffee as we’re loading the car so we get to stop at Tim Hortons anyway. Well, I was the one who set it on the amp. . .

I guess it is time to explain about loading. Perhaps a few, or many of you are in a band, but I’m assuming many also are not, so here’s a peek. My least favorite part of being in a band is loading, which is a huge proportion of the time one spends. For example, let’s say we have a show in Portland. This means that we need to allow about 20 minutes to pack up the equipment at home. Then, the car gets backed into the driveway and all of the gear is packed into it. Another 20 min. Then we drive to the club, where we need to first send an emissary in to make sure there is an appropriate place to load. Then we park illegally while we load. With two people it’s sort of tedious because one person needs to watch the stuff, leaving the other to do all of the hauling. For this reason, we usually take shifts. Then, after the gear is loaded in, Nick finds a parking place. Next is the task of setting up onstage. This takes us about twenty minutes. For my drums, which are very minimal, that means setting up four drums, three cymbals configurations and one pedal. You can’t just throw them together. Ergonomics and replicating the set up I’m accustomed to are crucial, so I may keep moving things an inch here or there, over and over again. Sometimes, when the club has an official sound check, we have to set up and then break down again, to make room for another band to sound check. (Which means we set up again when it’s our turn to play the show.) Once we play, we then have to break down the equipment again, pull the car around, take turns loading out, pack, and bring it all home again. Then the next day we have to set up again to practice. So, for example, for a 30 minute set, one might spend an hour and a half to two hours loading and setting up.

When you stay overnight somewhere, it is wise to bring the gear inside if possible. As I write this, we’re staying on a 3rd floor walk up, so imagine. Then our kind hosts have all this gear in their apartment. The Toronto hotel was on the 9th floor, so we had to get two luggage carts and do shifts. It’s pretty easy to spill a coffee in that situation, especially if you’ve set it down on a wobbling cart. This is why I got to go to Tim Hortons, for a second coffee. Yay for loading!

We pull over after a couple of hours because the boys want to see the US / Italy match. The town is beautifully quaint and is called Brockville. Coincidentally, the bar’s satellite radio plays “Don’t Go Back to (B)rockville” on the stereo while we’re there—or maybe it’s a hint. The place is jammed with rugby players and rugby boosters, who are wearing hawaiian shirts and funny hats. They stagger periodically to the bar, with black eyes and bum knees. One asks the waitress to fill a rugby boot with tap beer. A minute later they start singing and force a team mate to slam the foot flavored beer. I keep trying to engage them because I am bored by soccer. One guys wanders up with a penis-shaped hat. Of course I have to ask. He explains that the biggest loser of the game has to wear the hat. What did he do? He took a job in another province.

US ties. We leave.

I start reading aloud from Motely Crue’s The Dirt, one of my favorite “lite” books of all time (Go buy it NOW.) The band at one point calls groupies “human entertainment.” The boys think this is so funny, and will now refer to it as “H.E.”

When we enter Quebec, for some reason I’m shocked when all the signs are in French, Nick keeps pretending not to understand them. Like–, “Wha? Toon-ell? I need to find a tun-nel!!” We are tired so this is hilarious.

Montreal is very old-looking, go figure, and seductive, like an older French woman. The first person on the street I see is wearing a vintage-style sailor suit. The gig is at a club called L’Escogriffe, which is an underground, stone=walled place with a cool marquee, which our names are on(!). We play with two country/rockabilly bands, and have our first real “dancer” (who gets kicked out) and our first heckler. He keeps asking questions of us onstage, like, “Did you really come all the way from Portland? Why are you so eighties influenced? What kind of amp is that?” Finally, I have to do something, so I say, “Wow, our first heckler. Exciting!” He is hurt and embarrassed, denies that he is heckling. Then he skulks out. Bad Flirt show up to cheer us on, our first band friends in Canada.

Bloodshot Bill is up after us and he sounds uncannily like Wanda Jackson. I hadn’t known one could get that sort of guitar sound these days. The label guys tell us he played 250 shows last year. This makes him an alien to me, another species.

Afterwards, we go back to Andrew’s, where we are staying. I sleep while the boys go looking for trouble. They fail.

We wake at 1:00 PM the next day, sweating in the bright sunlight, not knowing where we are.