As soon as we leave the stage, a headache hits me, the likes of which I’ve rarely experienced. The room is spinning. I ask the first person who I meet if he has any painkillers. He probably thinks I’m trolling for Oxycontin. And come to think of it, Oxycontin might improve tomorrow’s multi-nation commute.

I take two aspirin. I go sit down and try to breathe. Lawrence sits with me and I feel stupid because I can barely speak, but it’s very kind that he’s keeping me company.

We leave the show with our friend Alice and head to her apartment. She has promised Nick and Yoshi a private screening of Revenge of the Nerds. I fall almost instantly asleep.

They wake me an hour later when the cab has arrived and our epic journey begins. We’re on Ryan Air which is like the Greyhound Bus in the sky. Very strict luggage policy, horrible lines. We manage to muscle through it and several hours later, we’ve landed in Oslo. Now we take a bus from the rural Oslo airport into the Oslo bus terminal.

From there, we must take a bus to Sweden. While we wait we decide which Norwegian concessions to sample. I buy a delicious waffle with strawberry jam. Nick gets a sausage. Yoshi gets…pizza.

We have no working phones and are trying to communicate to Wyatt, Yoshi’s bandmate from the Aislers Set, that we’ve missed the first bus to Gothenburg and will be 2 hours late. Yoshi roams around the station holding his iPod Touch in front of him like a crucifix, scanning for wi-fi signals. [If Yoshi were an action figure, he would come in four versions–Sleeping-While-Sitting-Up Yoshi, Destroying-the-Drums Yoshi, Cracking-Everyone-Up Yoshi, and Wi-fi-Seeking Yoshi.]

We send Wyatt the message and hope for the best.

The music coming through the speakers on the bus is hilarious. Late era Kiss prevails, such as the gem, “Heaven’s On Fire.”

Deboarding the bus, I see two metalheads who are paradoxically, totally over the top, yet totally authentic looking. They are filthy, carrying a case of beer each, in tattered denim vests and paper-thin Iron Maiden tshirts. They look like Vikings from Hell. “Wow!” I gasp. Yoshi explains that these kinds of fellows are a dime-a-dozen here in Sweden. I want to meet them all, right now.

Miraculously, Wyatt is waiting for us and he leads us on yet another bus to his lovely apartment high above Gothenburg.

Tonight we will be playing with his wife Josephine’s band, Love is All.

U2 is in town and once we arrive at the club, we realize it’s been booked for both a U2 pre-party and a U2 afterparty, with Love is All and Eux Autres in the middle like a couple of slices of bologna. The club is packed with people who are just bursting with excitement to see U2. The playlist is all U2. The projector screens show U2 videos. Everyone’s wearing U2 tshirts. “Don’t worry, they’ll all clear out,” the sound man tells us.

The show is great. Love is All are absolutely riveting. Plenty of the citizens of Gothenburg blow off U2 in favor of some authentic Swedish rock with an American aperitif.

We hang out with tons of people after the show, winding through the streets of Gothenburg, and closing the night at a crepe stand at 3:30 AM.

It has been a long, long, beautiful day. 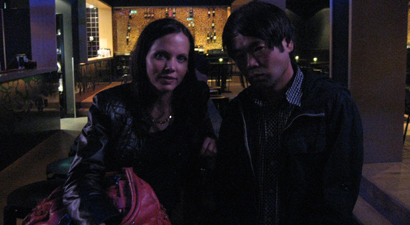