Over the next week or so, I’ll be posting the tour diary entries from our tour — the ones i couldn’t get enough stable internet access to post at the time.

Before Nick and I head out to the airport, I make him wait for me to get my nails done, which he finds mildly annoying. On the subway ride to the airport, a woman is taking up an enormous amount of space with all of her bags. My bag gets snagged on hers, but she won’t bother to move it. She just stares at me, like i’m a gnat buzzing around. She then opens a packet of heat-and-serve lentils and proceeds to eat it right there on the filthy subway, licking each finger many times as she eats. She is all dressed up, which is hard to reconcile with the lentils from a packet. I’m still mad about the bags, so i start to send telepathic messages, willing her to spill on the lap of her white satin floral dress. I send the messages very strongly, chanting “spill, spill” in y head. Soon, a big dollop of lentils falls on her lap. She swipes it up with a finger and sucks the finger clean.

I lean into Nick and say, “I made her do that.”

We’re booked on the red eye to London and we get to Newark airport too late for any restaurants to be open. We get Jamba Juice, knowing that this will be the first of many meals skipped over the next few weeks.

The flight is fairly uneventful. I sleep most of the way, but every time i open my eyes, Nick is staring straight ahead. Not sleeping, not watching TV. Just staring. I worry that he knows something I don’t.

At Heathrow, we clear customs and then look for our label gentleman, John, who will be picking us up. We find him and he’s with another gentleman, Lawrence, who John says will be driving us. It should be noted here that I let Nick make most of the tour preparations. I have remained blissfully, perhaps stupidly unaware of much of our situation. This means that most of the details of our tour will be total surprises. Like the wondrous fact that someone will be driving us around for a week in England.

We pile into the Jetta wagon they’ve rented and they show me my keyboard for the week, an ancient looking contraption called the Bunny One. I can’t wait to hear how this thing sounds. IT will either be brilliant or ungodly. But beggars can’t be choosers.

We drive for a couple of hours to the site of the festival that will be only our second show ever with this line up, the trio. Oh, and since Yoshi has been touring with Still Flyin’, we haven’t practiced in 2 months. To say i am nervous is a gross understatement. 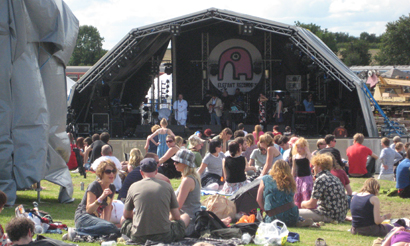 The festival, Indietracks, is held at a defunct train depot in the English countryside. There are tons of indiekids wandering around, and a terrific line-up to fill the day. We wander around drinking beers and watching bands. Nick and I worry about how Yoshi is going to find us — he’s coming separately, and we suddenly realize that none of us have cellphones that work. It seems totally hopeless, but as Nick is napping in the Jetta, listening to the distant strains of Camera Obscura from the big stage, he hears a voice yelling his name. He pops his head up and spot Yoshi, along with his band mates Wyatt and Maria, striding towards the car.

As the sun goes down, we watch the music and feels so lucky to be at this festival, reunited, among all of these great people who love music so much.

I go sleep in the car while everyone else parties. About 2 AM they converge on the car. They’re all a little loopy, and we head back to the hotel.

As Nick and I are falling asleep, we hear a knock on the door. Wyatt and Maria need a place to sleep. We offer up our room, and we settle in, all five of us in a tiny hotel room. Another knock comes. It’s the desk person. She says she knows that there are too many people in the room, and that she will give us ten minutes to get the extra people out or she’ll call the police. This is literally a foreign concept to us — that someone would call the police for such an offense. Wyatt and Maria go sleep in the parking lot, and I sleep like crap on the floor, knowing that tomorrow is the moment of truth, when we play the festival and either make our label guy proud or very sorry indeed.